What uterine bleeding is abnormal?

Posted in abnormal bleeding; Posted 4 years ago by Andreas Obermair

Here's a breakdown of reasons for abnormal bleeding and what to do if something's off.

What counts as abnormal?

There are different categories of abnormal: bleeding that occurs between periods (spotting), regular periods that are heavy or longer, or erratic periods. Menstrual cycles more often than every 21 days or farther apart than 35 days are abnormal. Normal bleeding lasts five to seven days. Heavy bleeding during a menstrual cycle or bleeding that lasts more than 7 days is called menorrhagia. 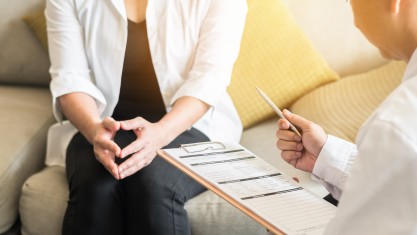 In most premenopausal women who experience abnormal uterine bleeding, it is caused by a hormone imbalance. When hormones are the problem, this is called dysfunctional uterine bleeding (DUB). DUB occurs when the normal cycle of menstruation is disrupted usually due to failure to ovulate. Hormone imbalances are common in teenagers experiencing puberty or women entering menopause. This causes sporadic bleeding, heavy bleeding, or spotting. Many teenage girls have episodes of irregular bleeding during the first few months after their first menstrual period. This usually resolves without treatment. Hormones are often used to treat DUB, such as progestin, the contraceptive pill or an intrauterine device.

Polyps and fibroids can be removed surgically without compromising fertility in young women.

Sometimes, it is challenging to identify those women who are premenopausal but have abnormal bleeding from causes other than hormonal imbalances. Women need to be up to date with their pap smear (to make sure she does not have cervical cancer) and a pelvic ultrasound may be useful to investigate the endometrium (inner lining of the uterus), myometrium (the muscle layer), tubes and ovaries. Sometimes, a Pipelle is recommended to sample the endometrium.

In postmenopausal women, any bleeding is abnormal. Therefore, even a streak of blood (spotting) needs to be investigated.

The GP will need to make sure your PAP smear is recent. The GP may also order an ultrasound to look at your reproductive pelvic organs. A gynaecological specialist may suggest to look inside your uterus by conducting a hysteroscopy (a thin tube with a tiny camera). An endometrial biopsy may be requested if abnormal growths are found (a sample of the uterine tissue for testing).

Uterine fibroids can be removed surgically. Young women can have fibroids removed and keep the uterus and the ability to have children. For postmenopausal women this may not be a priority any longer and needs to be balanced against the risk of cancer.

However, cancer is not always the cause of abnormal uterine bleeding. Many benign and treatable problems can also cause abnormal bleeding. From our research on many thousand women, the GP or the gynaecological specialist provide information that is most trusted and valuable – even before Dr Google or girlfriends.

Putting up with irregular bleeding is never a good idea because it can mask serious conditions that cannot be detected otherwise.