Uterine fibroids are tumours arising from smooth muscle tissues within the uterus. Another medical term for fibroids is leiomyoma or "myoma". Fibroids are the most common pelvic tumours in women and they are entirely benign.

Fibroids are very common and may affect as many as 25% of all women before the age of 50 years. Some women have a single fibroid mass and others have many fibroids. Fibroids can be small and not bother a patient but some fibroids can grow so large that they occupy the entire abdominal cavity in a woman’s pelvis.

Most fibroids do not cause any symptoms, but some women with fibroids can have:

For some women these symptoms can be mild, while for others they can be debilitating and greatly affect a woman’s quality of life.

If fibroids grow to a massive size, they can cause very serious bleeding, bowel obstruction or obstruction of the urinary collecting system so that women cannot empty the bladder. Cases like those constitute medical emergencies but are rare.

Uterine fibroids are classified based on their location within the uterus as subserosal, intramural, and submucosal (see picture). Fibroids can typically have more than one location. 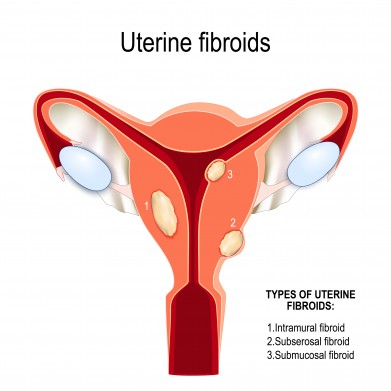 We don’t know for sure, but factors that can increase a women’s risk include hormones (estrogen and progesterone levels), early menarche, obesity, never having given birth, and family history.

Can fibroids be cancerous?

A women’s chances of developing a cancerous growth within the uterus do not increase because of uterine fibroids, neither does having them increase chances of getting other gynaecological cancers.

Sarcomas and carcinosarcomas are uncommon but highly aggressive malignant tumours (cancer) also arising from smooth muscle tissue of the uterus. We don’t believe that fibroids can turn into sarcomas.

However, sometimes it can be difficult to distinguish between fibroids (benign tumours) and sarcomas (malignant tumours).

How are fibroids diagnosed?

A doctor may be able to feel the lump or mass during a pelvic exam to determine the size and mobility. If a doctor suspects fibroids an ultrasound is the first step to determine what is causing the pelvic symptoms. Very large fibroids should be investigated by MRI scan. Women will be required to have an MRI scan prior to surgical treatment. An MRI will also help determine if there are other conditions present such as adenomyosis.

A definitive diagnosis requires tissue which can be obtained through a Pipelle, myomectomy (to remove the fibroids and preserve the uterus) or a hysterectomy (removal of uterus). A hysterectomy is the most common surgical procedure to treat fibroids.

In premenopausal women in whom ultrasound has shown the typical features of fibroids, a tissue diagnosis does not need to be obtained, if there is no abnormal bleeding pattern.

For women who have small fibroids without symptoms, they can usually be followed without any treatment. In many cases, fibroids will shrink over time. Fibroids normally stop growing or shrink once a woman reaches menopause.

Wait and see may not be the ideal option for women with very large fibroids or fibroids that cause symptoms and a definitive diagnosis is recommended.

There is a general lack of good quality data on the medical treatment of fibroids. It is generally accepted that medical treatment provides initial symptom relief in a large number of women, but treatment fails after a year and recurrence of symptoms are very common. A US study suggested that 6 of 10 women who were randomly assigned to oral medical therapy required surgery to treat the fibroids by two years.

Medications I do not recommend:

Hysterectomy is the definitive procedure with no chance of recurrence of bleeding or pain beyond the postoperative recovery. I recommend hysterectomy for the following women:

Hysterectomy should be done vaginally or laparoscopically (key hole or minimally invasive surgery); if the opening of the abdomen is recommended, I recommend that patients look for a second opinion.

Myomectomy is a surgical option for women who have subserosal and intramural fibroids and who desire fertility. Myomectomy is possible because there is often a distinct tissue plane between the fibroid and the surrounding uterus. At myomectomy the uterus is opened and the fibroid(s) are removed one by one. In premenopausal women the surgical approach (open vs. laparoscopic) needs to be discussed. There is a risk of uterine rupture during pregnancy following laparoscopic myomectomy. Because of the surgical risks plus the risk of an underlying cancer I do not recommend a myomectomy to postmenopausal women.

Endometrial ablation is a good option for treatment of bleeding irregularities but not a preferred choice for women with fibroids.

Enquire about an appointment.