The latest research presented at International Conferences on Gynecological Cancer

Posted 8 months ago by Andreas Obermair

I recently attended the 2019 Annual Scientific Meeting of the International Gynecological Cancer Society, held in Rio de Janeiro, Brazil a couple of weeks ago and the European Society of Medical Oncology in Barcelona, Spain. The dominating theme for both conferences is the continued interest in – so called - targeted treatments for endometrial and ovarian cancer.

I estimate that survival of patients diagnosed with gynaecological cancers will improve vastly as the result of powerful research in the next few years. 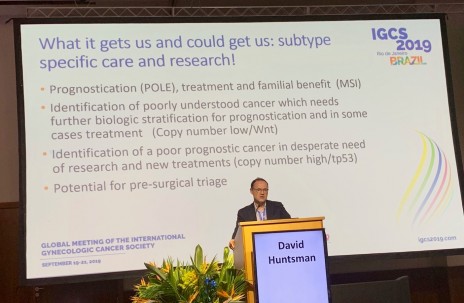 Similarly, for patients with advanced-stage endometrial cancer that are classified as MSI high (carriers of Lynch syndrome) a novel drug (Pembrolizumab) has been approved by the Australian government while I was overseas attending the conference. This approval was granted on a large clinical trial conducted in Australia that was noticed globally. This drug will help hundreds of women every year because typically patients with MSI-high tumours can expect a poorer prognosis than other endometrial cancer patients.

If you are interested in supporting gynaecological cancer research check out our latest Cherish Fundraiser.

Referral information during
the COVID-19 Pandemic