A Guide to Ovarian Cancer Symptoms

Ovarian cancer is a malignant disease arising from the ovaries or fallopian tubes. Numbers of patients diagnosed with ovarian cancer are increasing, with Cancer Australia reporting about 1,530 cases per year.

Ovarian cancer symptoms are unspecific, may present at later stages and can be mistaken for less serious conditions, such as irritable bowel syndrome, an upset stomach or bladder infections. 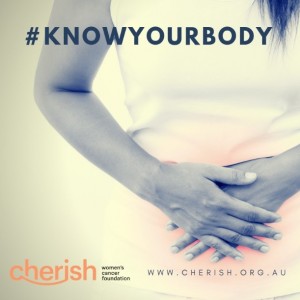 Common symptoms of ovarian cancer include

Other ovarian cancer symptoms can include

If you have one or more of these symptoms and they are persistent on most days over 2-4 weeks, then you should speak to a doctor as soon as possible. In hindsight, almost all ovarian cancer patients display some of the above signs, but these signs may also be indications of benign conditions.

The diagnosis of ovarian cancer is established in a stepwise fashion. First, your doctor will rule out other causes of your symptoms, perform a pelvic examination, arrange for medical imaging scans such as an internal ultrasound and tumour marker blood tests (CA125, CA19.9, CEA, HE4).

Some women may even have a colonoscopy to rule out any bowel conditions that may present with similar symptoms. If there is still concern for ovarian cancer, surgery will be initiated, where the surgeon takes a tissue sample (biopsy). This procedure is ideally performed by a gynaecological oncologist.

The key to successful ovarian cancer treatment is the combination of surgery plus chemotherapy. Surgery for ovarian cancer will typically remove the uterus, fallopian tubes and both the ovaries. Commonly the omentum and lymph nodes will need to be removed also. Sometimes, patients will require a bowel resection. Almost all patients will require chemotherapy after surgery.

It has been suggested that the use of talc powder may cause ovarian cancer if the talc used on the external genitals would travel through the reproductive tract, through the fallopian tubes to the ovaries; the inflammation caused by the talc particles could lead to female genital cancer.

However, Cancer Council reports the ‘current evidence is insufficient to conclude that the use of talcum powder on the external genitals is linked to ovarian cancer’. Research in this area continues and women who are concerned about talc can use other products, such as cornstarch based powders, or avoid using the products altogether.

Salpingectomy (removal of the fallopian tubes) for contraception reduces the risk of developing ovarian cancer by 50% to 60%.

If you have any signs or symptoms of ovarian cancer, they are persistent and unusual, you should speak to your GP in the first instance. Ovarian Cancer Australia have a symptom diary, this can be downloaded and completed prior to your appointment for a record of how long and how often you have been experiencing the above symptoms. Many benign and treatable problems can also be a cause of these symptoms, not just ovarian cancer. Most of the time these symptoms will have a less serious reason, however it is important to know the cause so you can receive early treatment. Putting up with abnormal symptoms is never a good idea because it can mask serious conditions that cannot be detected otherwise.