How long does ovarian cancer take to grow?

Ovarian cancers develop and grow at varying rates over time. Some types of ovarian cancer may grow slowly over years while others can progress very quickly within months.

Unfortunately, many ovarian cancers go undetected for years due to vague symptoms and no accurate screening tests to identify the disease in its early stages. The Cervical Screening Test does not screen for ovarian cancer and only investigates cervical cancer.

When ovarian cancer progresses the ovary and tumour can grow within the space in the abdomen without the individual always noticing. A normal ovary is only a few cm wide. There is enough room surrounding the ovary that it’s not easy to feel the tumour or increased ovary size from the outside. Until it spreads through the pelvis and abdomen at a later stage is when symptoms tend to become more apparent. But it is still possible to have symptoms in the early stages. Knowing the signs and symptoms of ovarian cancer is important, particularly in high-risk women. Read more about them in my recent blog on the subject here.

What defines the growth rate?

The growth rate of a tumour depends on the properties of cancer cells and on tumour type. Doubling time refers to the amount of time it takes for one cell to divide or for a group of cells (such as a tumour) to double in size. It is different for different types of cancers. From studies in breast cancer, it is estimated that a 1 mm tumour contains approximately 100,000 tumour cells and a 1cm tumour would have approximately 100 million tumour cells.

Across various tumour types, the literature suggests that the tumour doubling time lies somewhere between 60 days and 100 days. For tumour cells to become a tumour and be visible on medical imaging, such as a PET or CT scan, the smallest we could see tumour cells is 6mm or greater. So, you can imagine that a tumour that is visible in a PET CT scan has actually been there for quite some time.

There are subtypes of ovarian cancer which differ depending on the type of cell they originated in, response to treatment, and aggressiveness. Epithelial ovarian cancer is the most common type, which is then further divided into four subgroups. Serous epithelial cancer is the most common type of epithelial cancer, which can then be divided into low and high grade.

High-grade cells grow and develop rapidly, are considered aggressive, and therefore unfortunately are diagnosed at advanced stages and have a worse prognosis. Compared to high-grade, low-grade serous ovarian cancers tend to be slower growing but are more resistant to chemotherapy. You can read more about the types of aggressive ovarian cancer here.

If diagnosed early when it first develops, this is considered stage 1. The stage will help to determine the most efficient and least harmful treatment. 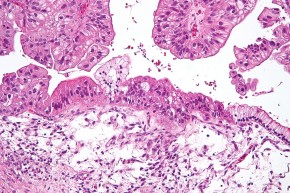 If you present to a medical doctor with symptoms that could point to the possibility of ovarian cancer, the doctor will rule out other diseases that present with similar symptoms such as irritable bowel syndrome, an upset stomach or bladder infections.

If other causes are ruled out and ovarian cancer is still suspected then scans (ultrasound, CT scan) and blood tests (serum CA125) will be undertaken. Unfortunately, these tests are not 100% reliable and the only way to confirm is through a biopsy, where the doctor takes a tissue sample, which is then examined under a microscope.

If you wish to read more about diagnosis, treatment and outcomes, please refer to the Ovarian Cancer page.