Does HRT tablets cause blood clots?

Posted 4 months ago by Andreas Obermair

Hormone Replacement Therapy (HRT) is used for management of menopausal symptoms such as hot flashes, dry skin and vulvovaginal atrophy. Like all medication or intervention, HRT can also cause unwanted side effects.

A well-documented risk of using HRT includes an increased risk of deep vein thrombosis (DVT). A DVT is a blood clot that develops in the body’s deep veins usually in the leg, which can potentially dislodge and travel to the lungs causing a Pulmonary Emboli (PE). Currently all progestogen and estrogen-based HRT therapy types come with a warning that they may increase a woman’s clotting risk.

Menopausal women who still have a uterus are normally prescribed a combination of estrogen and progestin therapy to manage their symptoms. In these women the estrogen provides the HRT and the progestin protects the uterus from developing endometrial cancer. Women who have undergone a hysterectomy (and do not have a uterus any longer) don’t require the progestin and will need estrogen only.

Studies published in 2016 and 2019 suggested that HRT can increase the risk of DVT two- or threefold, which I discuss in more detail below. The research has found the risk of blood clots depends on the type of HRT and how HRT is administered.

HRT can be administered as oral tablets, dermal patches, creams or suppositories. In the past it has been suggested that the risk of deep vein thrombosis/PE is higher with oral tablets compared to transdermal administration (through the skin). 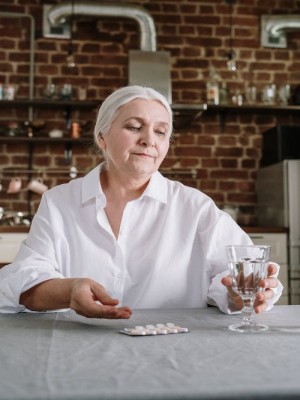 A case-control study published in 2016 included 838 cases of DVT. Women in the study were 18 to 64 years of age who had developed a DVT/PE for the first time in the leg, pelvis or in the lungs. These women were compared with 891 controls (similar women without DVT). The researchers assessed if in the preceding 90 days before the diagnosis of DVT HRT had been taken. Participants were asked if there was any immobilisation or smoking during the three-month period before the DVT occurred; as these may also increase risk of blood clots.

Did HRT increase the risk of DVT?

Overall, yes. Current use of hormone therapy was reported by 237 cases with deep vein thrombosis (28.3%) and 191 (21.4%) controls. Therefore, current use of any HRT was associated with a 72% increased risk of DVT.

Was there a higher risk of DVT with combined estrogen and progestin therapy, compared to estrogen therapy only?

Did route of administration increase risk of deep vein thrombosis?

A 2019 UK study has also investigated the risk of women taking HRT and developing blood clots including DVT.

The study assessed GP prescription records of 80,396 women aged 40-79 years who had developed blood clots and 391,494 women who had not. Similar to the previous study, HRT prescriptions were assessed in the recent 90-day period before the blood clots occurred.

Did HRT increase the risk of blood clots?

Yes, the researchers found that women who had taken HRT tablets were 58% more likely to develop a blood clot within 90 days than those who had not taken HRT.

Was there a higher risk of blood clots with combined estrogen and progestin therapy, compared to estrogen therapy only?

Yes. The increase in risk was higher for combined estrogen and progestin HRT tablets than for oestrogen only, and women taking equine oestrogen had a 15% higher risk of developing blood clots than those taking treatments containing synthetic oestrogen (estradiol).

Did route of administration increase risk of blood clots?

Yes. Again, this study found women who had used HRT absorbed through the skin, did not have an increased risk of blood clots.

What do we learn from this research?