Cervical cancer is the growth of abnormal cells within the cervix. The cervix is the lower part of the uterus (womb). Most early-stage cervical cancers come with high survival rates.

If diagnosed with cervical cancer, patients will normally be given a cancer ‘stage’. The stage of a cancer describes how far it has grown and spread in the body at the time of diagnosis.

The stage of the cancer will help surgeons determine the most efficient and least harmful treatment options for patients.

Some gynaecological cancers require surgery to determine a stage—as is the case with uterine, ovarian and vulval cancer—whereas other cancers, such as cervical and vaginal cancer, do not require surgery to obtain staging information.

Typically, a numbered staging system is used. Most types of cancer have 4 stages, numbered from 1 to 4. You may also see roman numerals used. The lower the number, the less the cancer has spread.

Cervical cancer is staged by FIGO (International Federation of Gynecology and Obstetrics) as follows:

Stage 1 - The cancer is confined to the cervix, and has not spread beyond it.

The cells have features consistent with cancer, but the cancer is still small and contained in the organ it originally developed in. It has not spread to any lymph nodes, organs, or body areas. This is often called “early-stage” cervical cancer.

Treatment of stage 1 cervical cancer often includes surgery. The extent of surgery can vary based on the stage (see above) which is determined by the surgeon’s gynaecological examination and additional factors that are given to the surgeon by the pathologist who examines the tissue biopsy.

Based on additional risk factors, some patients might still need further treatment after surgery to reduce the risk of a cancer recurrence. 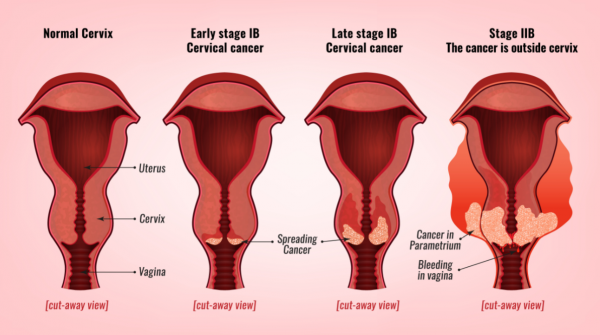 Stage 3 - The cancer has spread to the lower part of the vagina or the walls of the pelvis. The cancer may be blocking the ureters (tubes that carry urine from the kidneys to the bladder). It may have spread to nearby lymph nodes.

Stage 2 or 3 cervical cancer means that the cancer is larger or has spread into nearby tissues or lymph nodes (metastases).

Many of stage 2 and 3 cancers are still curable, depending on the location of the tumour, the cell type and whether the cancer responds to chemotherapy or radiation treatment. However surgery is often a poor choice of treatment for cervical cancer stages 2 or 3.

Stage 4 - The cancer has grown into the bladder or rectum, or to other organs like the lungs or bones.

Stage 4 cervical cancer means that the cancer has spread to distant areas of the body (lung, liver, bones, etc). The treatment at this stage may be curative (aiming for cure) or palliative (aiming for symptom control).

Cervical cancer may return months or years after initial treatment, and this is known as recurrent cancer or recurrence. The cancer may be a local recurrence which is confined to the area where the original cervix was, or a distant recurrence when the cancer has spread to another part of the body.

The original cancer stage that was given to the patient at the time of original diagnosis does not change when a recurrence develops.

It is difficult for a doctor to predict an exact course of the disease. Instead, a gynaecological oncologist can provide a general prognosis based on people with the same type and stage of cancer.

To provide a prognosis your gynaecological oncologist will consider: your test results, type, size of the cancer and spread, how you respond to treatment, and other factors such as age, fitness and overall health.

If you wish to learn about the signs and symptoms of cervical cancer, you can read my blog article here. For an informed assessment of cervical cancer stages and treatment options thereof, please arrange an appointment.