What is a sentinel node biopsy and what happens if it is positive?

Sentinel node biopsy is a surgical technique used in patients who have already been diagnosed with uterine, cervical and vulval cancer. Sentinel node biopsy allows the surgeon to determine whether the cancer has spread to nearby lymph nodes, or other parts of the body. This procedure is often completed under the same general anaesthetic but before the main surgery to remove the primary tumour.

What is a sentinel node?

In brief, the sentinel node is the first lymph node to drain cancer cells from the primary tumour. It is the first node where the cancer is expected to be present if it has spread. The word 'sentinel' means to stand watch. In essence, we try to remove only that particular node, instead of many nodes. The technique allows me to only pick one or two lymph nodes that are relevant and leave all other nodes intact and behind. This procedure helps inform a treatment plan and avoids removing healthy lymph nodes.

What happens during a sentinel node biopsy?

Immediately before the surgical procedure, a dye or tracer is injected into the cervix. I then perform a laparoscopy using special equipment to detect a particular wavelength of light that is emitted from the sentinel nodes. The lymph nodes that are stained green are identified as sentinel lymph nodes (see picture). This sentinel node is removed and then examined under a microscope and tested for cancer cells. If all is going well, the procedure takes about 30 minutes. 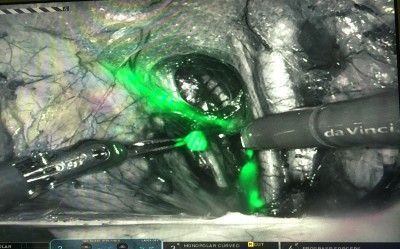 If the sentinel node is tumour free, all remaining nodes are assumed to be also tumour free and no further lymph node surgery is required. A negative result suggests that cancer has not yet spread to nearby lymph nodes or other organs.

A positive result indicates that cancer is present in the sentinel lymph node. Typically I recommend to patients that they have chemotherapy or radiation treatment or a combination of both.

This procedure replaces a radical lymphadenectomy, where most or all of the lymph nodes are removed. Previously extensive pelvic and para-aortic lymphadenectomy was required to stage cervical or endometrial cancer. The para-aortic lymph nodes are around the lower part of the aorta (the large artery that carries blood away from the heart). The advantages to sentinel node biopsy instead of a lymphadenectomy are that we gain more accurate clinical information, decrease the risk of lymphoedema (build-up of fluid) and achieve that in a shorter operating time for patients. In one of our recent publications we determined that the risk of lymphedema is as high as 35%.

In nine of ten patients, all lymph nodes that are removed and examined will be cancer free. Removing more than four lymph nodes is associated with an increased risk of lymphoedema of the lower limbs, causing great difficulties to the daily lives of patients. Sparing healthy lymph nodes will help prevent lymphoedema and improve the chances of a healthy life after treatment for gynaecological cancer.

While sentinel node biopsy is routinely performed worldwide, and while we have a rough understanding of the ups and downs compared to a full, radical node dissection, the pros and cons compared to removing no nodes are poorly understood.

In the next few months, our QCGC Research team will start a new clinical trial to explore exactly those issues.

Whether a sentinel lymph node biopsy is an option to treat your cancer, should be discussed with your gynaecological oncologist.