What is debulking surgery for ovarian cancer?

Treatment for ovarian cancer usually involves both surgery and chemotherapy. The type of operation, and whether debulking (I prefer the term cytoreductive) surgery is necessary depends on whether the cancer has spread outside the pelvic organs and on whether the tumour responds to commonly used chemotherapy.

During cytoreductive surgery, the surgeon aims to remove as much of the cancer from the patient's abdomen as possible. This surgery is especially necessary for patients whose cancer has spread throughout the abdomen and may improve patient survival rates. However, in some patients with advanced ovarian cancer it may not be possible to remove all the cancer upfront. This may be because removing the cancer (the treatment) might cause so much damage to the body that some people will never recover from that damage. 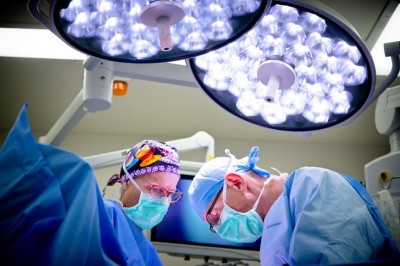 Cytoreductive (debulking) surgery is a common procedure for ovarian cancer because ovarian cancer is typically diagnosed at later stages due to the lack of effective screening options and the presentation of symptoms at a later stage.

Debulking surgery is not required for early stage cancer when it has not spread outside the affected ovary (stage 1). If ovarian cancer is diagnosed early, there is no need to remove small or large bowel, the spleen and other organs.

What happens during debulking surgery?

Depending on the stage and extent of a patient’s ovarian cancer, debulking surgery may involve the surgical removal of the uterus, fallopian tubes and both the ovaries. This is called a total abdominal hysterectomy and bilateral salpingo-oophorectomy (BSO).  Surgical menopause will occur in premenopausal women when both ovaries are removed.

Additionally, the omentum (fatty tissue that stitches over the intestines, liver and stomach) and lymph nodes may also need to be removed. In some cases of advanced cancer, removal of involved parts of the bowel is required. However, this is only performed if the surgeon believes that there is no other tumour in the pelvis and abdomen and through the bowel resection the patient can be rendered tumour-free.

Debulking surgery should be performed by a gynaecological oncologist because patient outcomes (survival rates) are better and is usually achieved through an open, abdominal approach. A patient is optimally debulked when no cancer is left behind after surgery.

If medical imaging (e.g., a CT scan) suggests that a patient has advanced disease, I often perform a diagnostic laparoscopy to confirm the tumour type, to arrange genetic testing and then refer my patient for upfront (neoadjuvant) chemotherapy. In such cases, I defer debulking (or cytoreductive) surgery by 2 or 3 months so that chemotherapy in the meanwhile has a chance to shrink the tumour upfront. Compared to upfront surgery, this leads to numerous benefits for the patient.

Ovarian cancer survival depends on how much tumour had to be left behind after surgery and the response of the cancer to chemotherapy. Females diagnosed with all types and stages of ovarian cancer combined have an overall 46% chance of surviving for five years compared to the general Australian population.

If you wish to discuss an ovarian cancer diagnosis, please arrange an appointment.