When is an ovarian cyst a cause for concern?

An ovarian cyst (sometimes called an adnexal cyst) is an abnormal growth that occurs in or near the reproductive system including the ovaries, fallopian tubes, and the surrounding tissues. Discovering a lump or cyst anywhere in the body can be worrying. However, an adnexal cyst is generally benign, although in rare cases they can sometimes be cancerous. 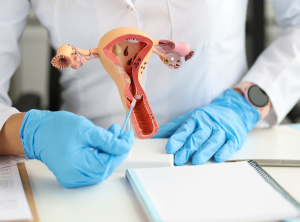 Cysts are typically spaces that are filled with fluid, but some masses are solid (that is not fluid-filled). Fluid-filled cysts on the ovaries are more common in women during their reproductive years and can be caused by hormones or bleeding at the time of ovulation. Solid, adnexal masses are more likely to be cancerous. Provided cysts don’t cause pain or other symptoms, the majority of adnexal cysts do not require treatment and will disappear on their own within 2-3 menstrual cycles. The likelihood that a pelvic lesion (cystic or solid) is cancerous increases with age.

What are the symptoms?

There are often no symptoms of an adnexal mass or cyst. They can be incidentally discovered during a routine pelvic exam or during medical imaging done for another reason. However, an adnexal mass can cause symptoms in a few cases including:

A cyst that bursts open (referred to a ruptured cyst) can cause severe, intense pain and bleeding and may require emergency surgery and treatment.

Whether symptoms appear is often dependent on the cyst size. It’s important to note, that these symptoms can also be present in many different benign conditions.

What are the causes?

Adnexal cysts may be associated with hormonal cysts, endometriosis, or polycystic ovary syndrome. Only a small number of cysts can be immediately life-threatening, such as a rupture, torsion or ectopic pregnancy. Managing an adnexal mass caused by an ectopic pregnancy requires ending the pregnancy.

How are they diagnosed and treated?

Adnexal masses are diagnosed by a pelvic exam or a vaginal ultrasound. In some cases a CT scan or an MRI may be recommended.

For women of reproductive age, if the adnexal cyst is small, there are no symptoms, it is fluid-filled, and the patient is at low risk of developing cancer, then it may be appropriate to monitor the cyst for 2-3 months. Most will resolve themselves within a few menstrual cycles. The patients’ age, ultrasound and blood tests will help to estimate if the patient is high or low risk of developing ovarian cancer.

Surgery to remove the cysts will be required if the patient is experiencing pain, it’s large, the cyst does not disappear after several months, or it begins to grow solid parts. Surgery is recommended if it’s a solid mass (not fluid filled). A wait and watch approach isn’t appropriate for postmenopausal woman, the cyst should be investigated quickly, as the ovarian cancer risk is higher.

Once removed, the adnexal cyst is tested in a laboratory to determine if it is cancerous. If the mass was cancerous, further treatment may be required to ensure we know the extent of the cancerous spread and to ascertain all the cancer has been removed.

In some cases when woman frequently develop fluid-filled adnexal cysts, hormonal contraceptives are recommended because they can prevent new cysts from developing.

What to do if a patient suspects an adnexal cyst

If an adnexal mass is suspected which could potentially be cancerous, a patient should visit a gynaecologist. If there is a concern that the mass could be cancerous, it might be better to see a gynaecologic oncologist straight away because they are more experienced in the diagnosis, and of treatment of ovarian cancers. If the adnexal mass appears benign, but for whatever reasons complicated surgery is expected, gynaecological oncologists are also more experienced in either operating or monitoring benign lesions for change.

The majority of adnexal masses are benign, and typically not a cause for concern. They can be diagnosed during a pelvic exam or ultrasound. Depending on the patient’s age and risk, they may be treated with either a watch-and-wait approach or surgery. Cysts with severe pain should be immediately treated.

If you are concerned about any of these symptoms and wish to discuss them with a Gynaecological Oncologist, Enquire about an appointment