How often do patients need chemotherapy for endometrial cancer?

The vast majority of patients will require only surgery. Sometimes stage 1 endometrial cancer that invades only a little into the surrounding muscle layer of the uterus may not even require surgery, and we may be able to treat the cancer using hormonal treatments. You can read more about hormonal treatments in a previous article here.

However, for some patients postoperative chemotherapy is indeed needed. For example, if the surgeon could not remove all the cancer or if the surgeon feels that microscopic cancer cells that are invisible could still be floating around. Therefore, chemotherapy for endometrial cancer is generally for patients with advanced disease (stage 3 or 4 when the cancer has spread to the lymph nodes, to peritoneal surfaces, the omentum or other areas of the body).

For other patients, chemotherapy can be used to shrink the tumour load prior to surgery. For example, a patient who had a laparoscopy and a curette for diagnostic purposes: the gynaecologist found cancer around the peritoneum (inner lining of the pelvis and abdomen) and it was clear to me from the outset that an operation alone would not “fix” the problem. Such patients have chemotherapy upfront, followed by surgery. The patients we have treated this way, did very well. 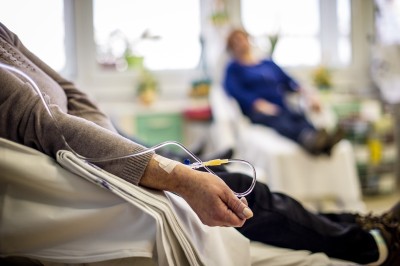 Chemotherapy may also be considered if if an endometrial cancer recurrence developed, and the cancer returned after the initial treatment.

How is chemotherapy administered?

Chemotherapy is usually started within four to six weeks after surgery. In most parts of Australia, it is prescribed by a medical oncologist, who specialises in treating cancer with medications. Chemotherapy is generally administered via an intravenous (IV) drip placed into a vein in the arm using a needle, but sometimes may be provided orally as a pill.

Patients may receive one chemotherapy drug; two or more drugs can be used in combination. Chemotherapy is given in cycles followed by a break or rest period. Patients will require several treatment cycles, sometimes up to six, every 3–4 weeks over several months. Rest periods are needed because chemotherapy also damages healthy cells and can have side effects, so the body needs a break to recover. Treatment is most often done as an outpatient visit at a hospital, and patients go home the same day.

The side effects of chemotherapy depend on the individual, type, the dose and the patient’s general health and fitness. Side effects can include reduced blood counts, fatigue, infection, nausea and vomiting, numbness and tingling in the hands and feet, hair thinning or loss, loss of appetite, and diarrhea. There are ways to help reduce side effects and their severity during treatment, and side effects generally lessen after the treatment is completed. More severe side effects can also include hearing loss and kidney damage.

In the future we will see more patients treated with “targeted treatments”, which means that novel medication is available for certain subtypes of endometrial cancer; for example patients with changes in their tumour profile. These medications are incredibly effective but also can have side effects. A considerable amount of research has been done and completed in this area and my research group is also active in this field.

In summary, chemotherapy is prescribed for advanced stage 3 or 4 endometrial cancer patients when the cancer has spread throughout some parts of the body or cancer cells may still remain after surgery. The chemotherapy drugs can enter the bloodstream and travel throughout the whole body to destroy the cancer cells.