Warning signs of gynaecological cancer you might be ignoring

Apart from screening for cervical cancer, there are no other screening tests for other gynaecological cancers. Advice is to know your body, and recognise if something is not right, then present to your doctor with concerns.

Gynaecological cancers can occur in or on a woman’s reproductive organs and genitals and include cervical, endometrial (uterine), ovarian, and vaginal and vulval cancer. Each year in Australia over 6,600 women are diagnosed with gynaecological cancer. Yet many people cannot identify the warning signs and symptoms. 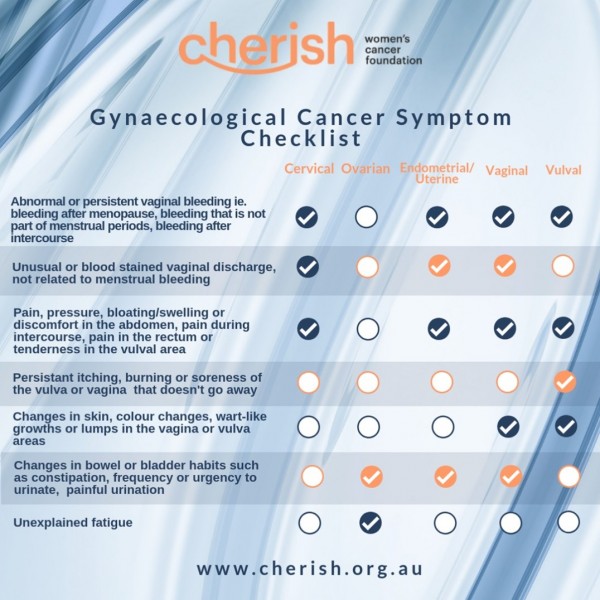 Generally, there are no signs or symptoms in the pre-cancerous and early stages of cervical cancer. This is why regular screening tests for cervical cancer every 5 years are important. Most commonly signs can include abnormal or persistent vaginal bleeding between periods, after intercourse or after menopause. Unusual or blood-stained vaginal discharge should be investigated. Pain in the abdominal area can also occur.

Unfortunately, ovarian cancer is often diagnosed at a later stage, due to the symptoms being unspecific, and can be mistaken for irritable bowel syndrome, an upset stomach or bladder infections. Unexplained excessive fatigue is also a symptom.

Both these types of gynaecological cancers are uncommon and typically affect postmenopausal women. Both have symptoms of abnormal or persistent vaginal bleeding, pain/pressure or abdominal swelling, pain during intercourse, pain in the rectum or tenderness in the vulval area. Vulval cancer can also present with persistent itching, burning or soreness of the vulva or vagina that does not go away.

You can read more about vaginal and vulval cancer symptoms here.

If you have experienced any of these gynaecological cancer symptoms that are persistent or unusual you should see your GP without delay. In most cases, the symptoms will be the cause of a less serious issue but its important to get the appropriate treatment started as soon as possible to eliminate any serious diseases. Early detection for gynaecological cancer improves your health outcomes.